New edition: There is a new edition of Villagers & Villains available. In this 2nd edition printing you have (4) brand new cards which add an extra dimension to game play: The Carnival, Viking Queen, Carni, and Gate House work in sinergy to either extend the game, add a lot more gold to your town, or like “hot potato” ruin your town score if you end up with the Carnival on the final round. The game has an upgraded DIE (the 1st edition die was admittedly evil, and was universally loathed). You will identify the new edition by the COVER text which is glossy and now outlined. (see new additions in the image below) 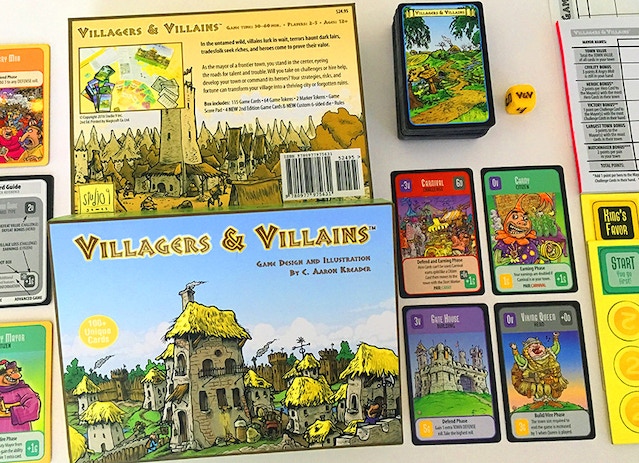 Unrivaled Finals 2018: The UNRIVALED tournament was scheduled, then canceled due to an abrupt folding of the company. This was a 3rd party company which had no affiliation to Studio 9 Games and is owned by Oomba. We are grateful for the efforts they made, and sad to see such a fun tournament ended.

Unrivaled Finals 2017: Congratulations to all the 4 finalist and all the participants in the Unrivaled Finals in Las Vegas. Enjoy this video of the final action Saturday night!

Event 2017: Villagers & Villains is part of the nation wide UNRIVALED tournament! You and your sponsoring store can win 50,000 as the tournament winner. Check it out here.

Demo our games and earn free games as part of the INDIE GAME ALLIANCE, join here:

Release info: Villagers & Villains: City Builder expansion and supplement was released Aug 30th 2015. You can get a copy of the expansion here.

Release info: Villagers & Villains: The Borderlands expansion was released July 15th 2014. The expansion provides 22 unique new cards—each with a dynamic not seen in the base game!

GenCon Interview/Video Featured on The Spiel

Green Bay 2012: We will be in Green Bay WI March 30-April 1 for Let’s Play Green Bay! We will have a number of events for our games. This will be a fantastic show for family fun and gamers alike. Check out the website.

C2E2 and PAX EAST 2012: We will be in Chicago April 13-15 for C2E2 in Artist Alley. Check out the website. We will also DEMO games at PAX EAST April 7-8 at the COMPLETE STRATEGIST booth.

GenCon 2011: We had a great show at GenCon 2011! Special thanks to our friends at Flying Buffalo at Studio 2 at Games Plus for their support.

Villagers and Villains is Released in the United States and Canada: On June 24th 2011 the first shipment arrived. The game is made available to the public.